25th January 2020 Special Lecture High School Symposium ～ Immigration to Japan its benefits and challenges in terms of the economy, business, culture and society ～

Summary:
On January 25th, around 120 students from four selected high schools in Hyogo Prefecture (Hyogo Prefectural Nagata High School; Hyogo Prefectural Himeji Nishi High School; Senri International School of Kwansei Gakuin High School; Kwansei Gakuin Senior High School) as well as the interested public gathered to discuss whether Japan should accept more immigrants.
The event started with a presentation by the Consul General of the Federal Republic of Germany, Dr Werner Köhler, who analysed the impacts of immigration on Germany over the past fifty years. Dr Köhler pointed out that Germany has become of the most diverse country in the EU, with about one quarter of the population having a migration background.

Dr Köhler’s speech was followed by a presentation by Ms Alicia Edwards, Public Affairs Officer at the US Consulate General Osaka-Kobe, who taught the students about her country’s long history of immigration. She highlighted that immigrants have heavily contributed economically and culturally to making the US what it is today. The two presentations were concluded with a Q&A session.

After the break, teams from all four participating high schools expressed their views on immigration, each school focusing on one specific area (economy, business, culture and society), analysing how Japan would be affected if the number of immigrants increased. Each school thereby presented pro and contra arguments before providing their opinion on whether Japan should accept more immigrants. All four teams agreed that more immigration would be desirable. 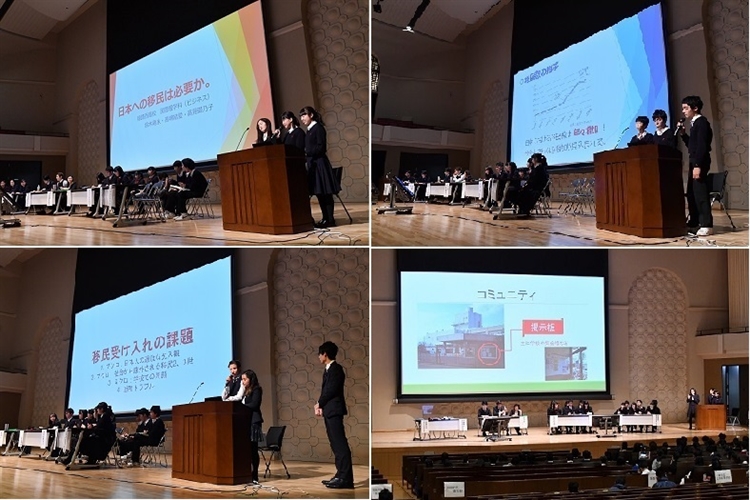 Having listened to the different views on immigration, the audience was asked to engage in a short debate. After a brief preparation, in which students were split into proposition and opposition teams, the audience engaged in discussion on whether Japan should try to increase the number of immigrants.

During the 3.5h that the event lasted, the participating students greatly increased their knowledge about the costs and benefits of immigration in Europe, the US and Japan.