Kwansei Gakuin Educational Foundation (“Kwansei Gakuin University”), Toyota Tsusho Corporation (“Toyota Tsusho”), and YGK Corporation (“YGK”) announced on September 9 that they have jointly developed an inspection technology for sub-surface damage (SSD*) that occurs in the manufacturing process of silicon carbide (SiC) wafers for power semiconductors. This innovative inspection technology is one of the outcomes of a collaboration between Kwansei Gakuin University and Toyota Tsusho, initially launched in 2017, to jointly develop mass production processing technologies for high-quality SiC wafers. It is expected to improve production efficiency and to address problems faced on the frontline of semiconductor production and research.

1. BackgroundSiC is a next-generation power semiconductor material to dramatically reduce power loss, compared to silicon (Si), as a popular power semiconductor material. For this reason, it is expected to be adopted much more in the future to achieve carbon neutrality in automotive, railway, industrial machinery, power and other industries. Expectations are particularly high for electric vehicles (EVs, HEVs, FCEVs).
One issue with SiC wafer production is that due to the hard and brittle nature of the material, the crystal layer near the surface can be fractured and SSD is formed when slicing and grinding/polishing the wafers (see figure 1). While the SSD reduces the yield rate of wafer production and causes power semiconductor defects, there was a lack of technologies available for imaging the full wafer surface. Therefore, there was a strong desire for high-speed, high-precision SSD inspection technologies that could be used for quality management during the wafer mass production process, and that could also be applied to acceptance inspections.

2. Joint DevelopmentKwansei Gakuin University (Professor Tadaaki Kaneko, School of Engineering) and Toyota Tsusho turned their attention to the applied laser light scattering technology of YGK. Together, the three organizations developed a technology for the full surface imaging of the SSD created in the machining process of SiC wafers, and enabling relative comparisons of the wafer quality. This technology enables imaging of the SSD by irradiating wafer surface with laser light and then detecting, at the optimal angle, light scattered from the surface and internally (see figure 2). It also enables high-speed inspection of the full wafer surface, which means it can be applied to operations like quality management in the mass production process. The aim now is to move quickly to commercialization of wafer inspection devices equipped with this technology. Incidentally, the SSD confirmed through this inspection technology can be completely eliminated by using “Dynamic AGE-ing®,” which is a contactless nano process technology integrating thermal etching and crystal growth, allowing control at the nanometer level. (Dynamic AGE-ing was announced by Kwansei Gakuin University and Toyota Tsusho in March 2021.)

This new technology will also be officially announced and exhibited at the International Conference on Silicon Carbide and Related Materials 2022 (ICSCRM 2022) to be held September 11–16, 2022, in Switzerland.

* SSD is created by contact with abrasives and stress, etc., during mechanical processing of wafers (slicing, grinding, and polishing).

・The SSD may remain after CMP 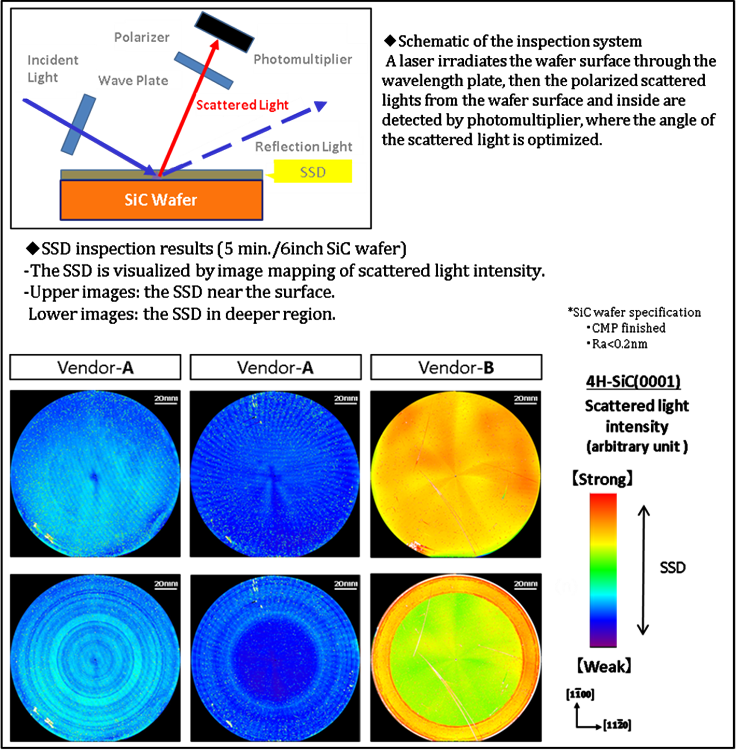